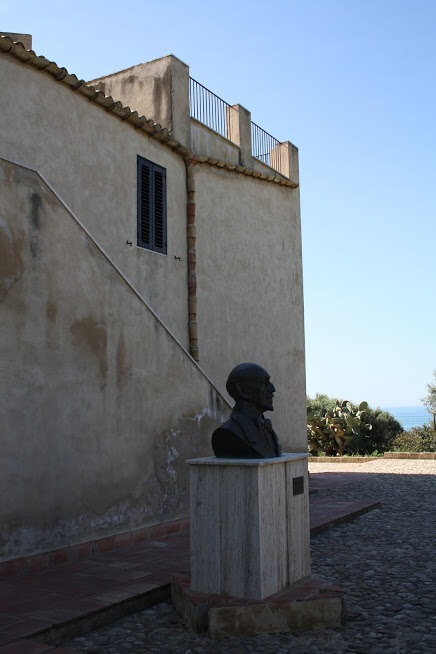 Luigi Pirandello's Birthplace and Locations in Girgenti and Porto Empedocle

Girgenti (Agrigento) is the hometown of Luigi Pirandello. The town was he was born and grew up, from which he never left if not physically, and which can not fail to return.
But also the perfect setting for many of Pirandello's characters, a stage, where "they can breathe, suffer, collide with each other, in short live!"( Enzo Lauretta )

Until the Second World War Girgenti was the town of his childhood inhabited by characters pushed to the edge of madness by their paroxysmal, hypertrophied self-love: sharp analyzers of their feelings and their troubles, taken up to the point of delirium by their passion for “reasoning “, even stronger than that for women and for property, obsessively intent on defending their appearance from their being in front of the others and sometimes of themselves – or suddenly suited to melt away from appearances, to elect themselves “dropouts “, “creatures “in the flow of life. Characters in Search of an Author”. Leonardo Sciascia – Lessico pirandelliano

Meet your guide in front of Pirandello's house museum.

Visit Pirandello's birthplace in the Caos district, point of start and arrival of his "involuntary sojourn on earth". The House, largely restored after the war, has been converted into a museum and displays relics, family photos, paintings, theatrical images, manuscripts, and editions of theatrical works and novels.

Then, we follow the short path that leads to the "rough stone" which contains his ashes, admiring the incomparable view of the "African sea".

Continue to Porto Empedocle and Agrigento to visit places and sceneries described in his short stories, novels, and plays set in the territory of Agrigento (The Old and Young -The Outcast- The Oil Jar- The Annuity- Il Turno- Think it over, Giacomino- The Late Mattia Pascal- One, No One and One hundred thousand, etc.).